We Must Prepare for Putin’s Worst Weapons 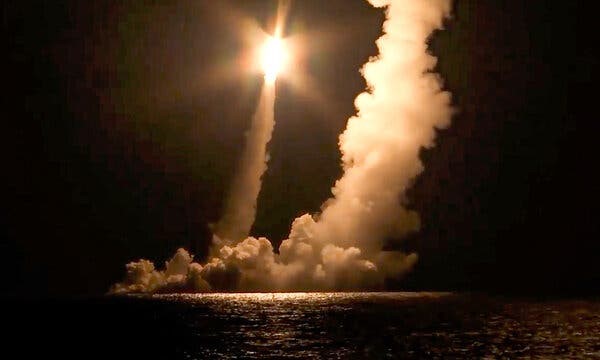 A Russian test of an intercontinental ballistic missile launched by a nuclear submarine in 2020.Credit...Russian Defense Ministry Press Service, via Associated Press

Russia’s foreign minister and its ambassador to the United States have both signaled that Russia’s debacle in Ukraine could lead to a nuclear strike.

By claiming that Russia is readying its weapons, by warning of a “serious” risk of nuclear escalation and by declaring “there are few rules left,” they purposefully rattled the ultimate saber.

Vladimir Putin himself has noted that he has weapons his opponents do not and that he will “use them, if needed.”

Even the C.I.A. director, William Burns, has warned of the possibility that Mr. Putin could use a tactical nuclear weapon, even if there is no “practical evidence” right now to suggest it is imminent.

Nevertheless, we should be prepared; the former secretary of state Henry Kissinger has argued that we should give the threat consideration.

We should imagine the unimaginable, specifically how we would respond militarily and economically to such a seismic shift in the global geopolitical terrain.

President Biden is right not to have elevated our nuclear DEFCON level.

Nor has the administration’s rhetoric stooped to Mr. Putin’s bait.

In 2012, I noted that Russia was the biggest geopolitical adversary to the United States, and it clearly remains a source of great concern to both Republicans and Democrats.

Given the magnitude of consequence of a nuclear strike, our potential options merit thought, by our leaders and by American citizens alike.

By invading Ukraine, Mr. Putin has already proved that he is capable of illogical and self-defeating decisions.

If he loses in Ukraine, he not only will have failed to achieve his life’s ambition to reverse what he sees as the “greatest geopolitical catastrophe” of the 20th century — the collapse of the Soviet Union — but he will also have permanently diminished Russia as a great power and reinvigorated its adversaries.

It is possible that Mr. Putin could face significant internal challenges to his leadership.

In such a circumstance, he may be able to convince himself that the United States and the West are the reason he invaded Ukraine and that the propaganda he has deployed to justify this immoral invasion was true from the beginning.

Some will conclude that to avoid provoking Russia — and thus avoid the prospect of a possible Russian nuclear strike — we should pre-emptively restrain Ukraine from routing the Russian military.

We could limit the weapons we send, hold back on intelligence and pressure President Volodymyr Zelensky to settle.

I disagree; free nations must continue to support Ukrainians’ brave and necessary defense of their country.

Failing to continue to support Ukraine would be like paying the cannibal to eat us last.

If Mr. Putin, or any other nuclear power, can invade and subjugate with near impunity, then Ukraine would be only the first of such conquests.

Inevitably, our friends and allies would be devoured by brazen, authoritarian nuclear powers, the implications of which would drastically alter the world order.

The right answer is to continue to give Ukraine all the support it needs to defend itself and to win.

Its military successes may force Mr. Putin to exit Ukraine or to agree to a cease-fire acceptable to the Ukrainian people.

Perhaps his control of Russian media would enable him to spin a loss into a face-saving narrative at home.

These are the outcomes he would be smart to take. But if a cornered and delusional Mr. Putin were to instead use a nuclear weapon — whether via a tactical strike or by weaponizing one of Ukraine’s nuclear power plants — we would have several options.

There are some who would argue for a nuclear response.

But there is a wide range of options, and they need not be mutually exclusive.

Further, we could confront China and every other nation with a choice much like that George W. Bush gave the world after Sept. 11: You are either with us, or you are with Russia — you cannot be with both.

Russia’s use of a nuclear weapon would unarguably be a redefining, reorienting geopolitical event.

Any nation that chose to retain ties with Russia after such an outrage would itself also become a global pariah.

Some or all of its economy would be severed from that of the United States and our allies.

Today, the West represents over half of the global G.D.P.

Separating any nation from our combined economies could devastate it.

The impact on Western economies could be significant, but the impact on the economies of Russia and its fellow travelers would be much worse.

It could ultimately be economic Armageddon, but that is far preferable to nuclear Armageddon.

Together with our key NATO allies, we should develop and evaluate a broad range of options.

I presume the president and the administration are already engaged in such a process.

The potential responses to an act so heinous and geopolitically disorienting as a nuclear strike must be optimally designed and have the support of our NATO allies.

Mr. Putin and his enablers should have no doubt that our answer to such depravity would be devastating.

Mitt Romney is a senator from Utah and was the Republican nominee for president in 2012.