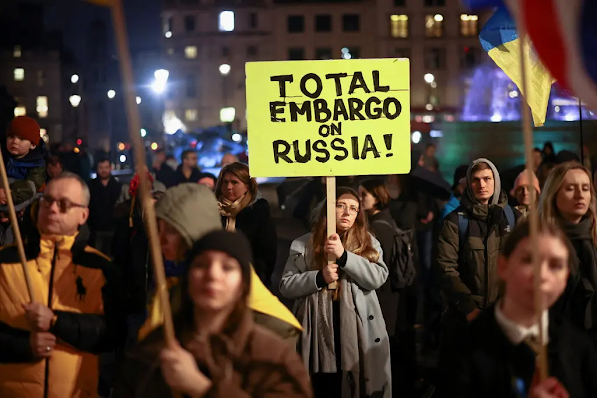 The other day, my CUNY and Stone Center colleague Branko Milanovic suggested that it would be interesting to “compare Napoleon’s continental blockade against Great Britain to the current sanctions against Russia.”

As it happened, I was already on the topic.

I had just read Andrew Roberts’s “Napoleon: A Life” and was thinking about the parallels.

The parallels are not, in fact, very good.

But laying out the differences is itself, I believe, a useful exercise, and there are other historical examples of trade embargoes in times of war that come closer to what’s happening now.

So, for those not familiar with the history, a potted summary: At the beginning of the 19th century, Britain and France were locked in a peculiar stalemate — the British unbeatable at sea, France very nearly unbeatable on land.

Napoleon tried to break this stalemate with economic warfare, closing the ports of Europe to British commerce.

But his blockade was leaky, and his attempts to plug the leaks led him into disastrous military ventures — first a bloody quagmire in Spain, then a catastrophic invasion of Russia.

What does this have to do with the current situation?

The conventional wisdom on Feb. 24, I think, was that Russia would win a quick military victory in Ukraine, but then face a cash shortage as the West embargoed its exports.

This has not come to pass.

On the military side, Russia’s attempt at a quick seizure of Ukraine’s major cities ended with huge losses and a humiliating retreat.

Russia then shifted to a grinding, artillery-driven battle of attrition in the Donbas but gained only a few square miles of ground, again at the cost of heavy losses.

That attack more or less stalled out in mid-June, and more recently Western weapons seem to have tipped the balance of power in Ukraine’s favor, although the front lines remain static, at least for now.

On the other hand, Western attempts to restrict Russian exports have been a bust.

Russian oil is still finding its way to world markets, and if anything, the country appears to be flush with cash.

But while Russia is having no problem selling stuff, it’s having a lot of trouble buying stuff.

Sanctions on Russia’s exports have, as I said, been a bust, but sanctions on its imports — refusal to sell Russia essential goods — have been more successful than, as far as I know, anyone expected.

Even nations that aren’t part of the coalition imposing sanctions, including China, have sharply cut their exports to Russia: 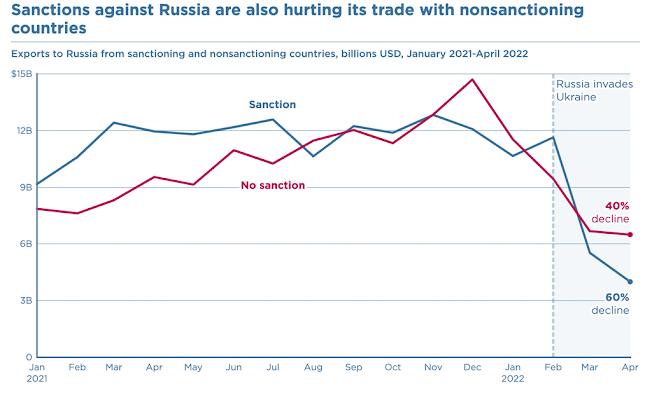 And this cutoff of imports appears to be hammering the Russian economy: 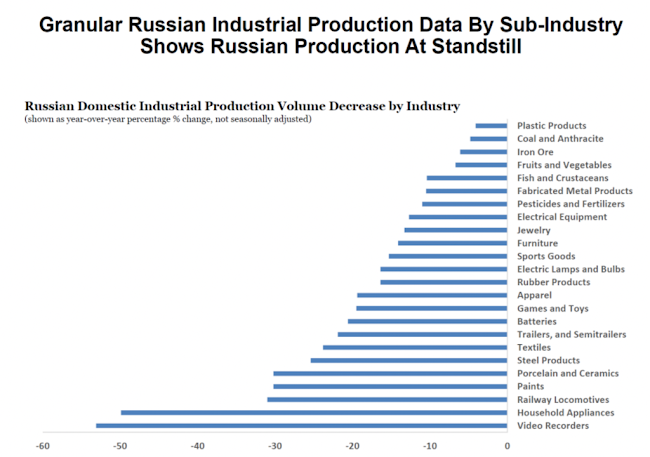 None of this would have made sense in the Napoleonic era, because international trade was much simpler then.

Sanctions appear to be restricting Russian industry because so much modern trade consists not of consumer goods but of industrial inputs.

That wasn’t true in, say, 1810, with the main exception being cotton — which didn’t come from areas Napoleon controlled.

Also, in 1810, there weren’t many multinational businesses.

Today, a company that manufactures goods in China — even if it’s Chinese-owned — is probably reluctant to sell potentially strategic goods to Russia out of fear that it may find itself sanctioned in other, more important markets, like the United States and the European Union.

So economic sanctions against Russia appear to have been surprisingly effective, just not in the way everyone expected.

That said, there are no indications I’m aware of that the economic cost of the sanctions is leading to any moderation in Russian policy.

What they’re doing instead is crimping Russia’s military production, which is a real problem for Putin, given the continuing inflow of Western weapons into Ukraine.

But wait, that’s not the end of the story, because there’s another de facto embargo underway.

Early in the war, supporters of Ukraine pleaded with European nations — Germany in particular — to stop buying Russian natural gas; they didn’t.

But now Russia is, in effect, sanctioning its own gas exports.

It’s not an explicitly announced policy, but Russia has been reducing deliveries to European markets, pretty clearly in an attempt to damage the European economy and increase political pressure for Europe to stop supporting Ukraine.

I find this chart, which shows the price of natural gas in the Netherlands — the European benchmark — fascinating: 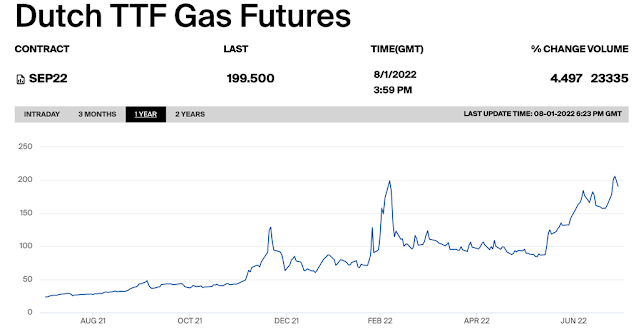 Gas prices spiked in February with the Russian invasion, but quickly subsided to more or less the pre-invasion level.

They didn’t begin a sustained rise until mid-June.

I don’t think it’s a coincidence that this upward break corresponds with the point when even the Russians realized that their Donbas offensive wasn’t going to produce a decisive breakthrough.

Everything suggests that this was when Russia began limiting gas deliveries.

In effect, Russia, not the West, is now the player trying to use economic warfare as a substitute for its inability to prevail on the battlefield.

The closest historical parallel I can find is the embargo on cotton exports imposed by the Confederacy early in the Civil War, in an attempt to force Britain to intervene on the side of the South.

This embargo didn’t last long, but by the time it was repealed, it was moot: The Union navy was blockading Southern ports anyway.

I wish I could be more sure than I am about European resolve, especially given high inflation and the high risk of recession (which is higher there than it is in the United States).

On the other hand, the nations that seem most likely to waver, especially Germany and Italy, have been lagging in their arms deliveries anyway; Russia’s stealth gas embargo is unlikely to deter crucial shipments from the United States, Britain and Poland, among others.

The truth is that it is hard to find historical examples of successful economic warfare unless you count blockades that were themselves a form of military action — like the U.S. submarine campaign that devastated Japan’s economy during World War II.

In the end, the war in Ukraine will probably be decided on the battlefield.

Paul Krugman has been an Opinion columnist since 2000 and is also a distinguished professor at the City University of New York Graduate Center. He won the 2008 Nobel Memorial Prize in Economic Sciences for his work on international trade and economic geography.