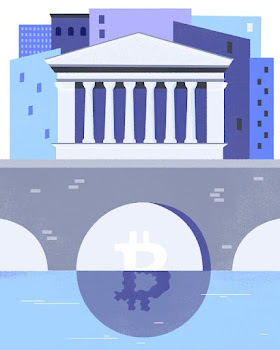 Last November, in the midst of an exuberant cryptocurrency market, analysts at BNP Paribas, a French bank with a Wall Street presence, pulled together a list of 50 stocks they thought were overpriced — including many with strong links to digital assets.

They nicknamed this collection the “cappuccino basket,” a nod to the frothiness of the stocks.

The bank then spun those stocks into a product that essentially gave its biggest clients — pension funds, hedge funds, the managers of multibillion-dollar family fortunes and other sophisticated investors — an opportunity to bet that the assets would eventually crash.

In the past month, as the froth around Bitcoin and other digital currencies dissipated, taking down some cryptocurrency companies that had sprung up to aid in their trading, the value of the cappuccino basket shrank by half.

Wall Street clients of BNP who bet that would happen are sitting pretty.

Those on the other side of the trade — the small investors who loaded up on overpriced crypto assets and stocks during a retail trading boom — are reeling.

“The moves in crypto were coincident with retail money flooding into U.S. equities and equity options,” said Greg Boutle, who heads BNP’s U.S. equities and derivatives strategy group, which put together the trade.

He declined to name the specific stocks that BNP clients got to bet against.

In the great cryptocurrency blood bath of 2022, Wall Street is winning. 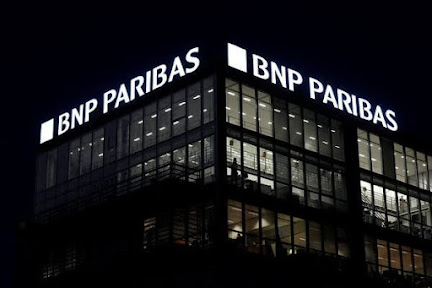 It’s not that financial giants didn’t want to be part of the fun.

But Wall Street banks have been forced to sit it out — or, like BNP, approach crypto with ingenuity — partly because of regulatory guardrails put in place after the 2008 financial crisis.

At the same time, big money managers applied sophisticated strategies to limit their direct exposure to cryptocurrencies because they recognized the risks.

So when the market crashed, they contained their losses.

“You hear of the stories of institutional investors dipping their toes, but it’s a very small part of their portfolios,” said Reena Aggarwal, a finance professor at Georgetown University and the director of its Psaros Center for Financial Markets and Policy.

Unlike their fates in the financial crisis, when the souring of subprime mortgages backed by complex securities took down both banks and regular people, leading to a recession, the fortunes of Wall Street and Main Street have diverged more fully this time.

Collapsing digital asset prices and struggling crypto start-ups didn’t contribute much to the recent convulsions in financial markets, and the risk of contagion is low.

But if the crypto meltdown has been a footnote on Wall Street, it is a bruising event for many individual investors who poured their cash into the cryptocurrency market.

“I really do worry about the retail investors who had very little funds to invest,” Ms. Aggarwal said.

“They are getting clobbered.”

Lured by the promise of quick returns, astronomical wealth and an industry that isn’t controlled by the financial establishment, many retail investors bought newly created digital currencies or stakes in funds that held these assets.

Many were first-time traders who, stuck at home during the pandemic, also dived into meme stocks like GameStop and AMC Entertainment.

They were bombarded by ads from cryptocurrency start-ups, like apps that promised investors outsize returns on their crypto holdings or funds that gave them exposure to Bitcoin.

Sometimes, these investors made investment decisions that weren’t tied to value, egging on one another using online discussion platforms like Reddit.

Spurred partly by the frenzy, the cryptocurrency industry blossomed quickly.

At its height, the market for digital assets reached $3 trillion — a large number, although no bigger than JPMorgan Chase’s balance sheet.

It sat outside the traditional financial system, an alternative space with little regulation and an anything-goes mentality.

The meltdown began in May when TerraUSD, a cryptocurrency that was supposed to be pegged to the dollar, began to sink, dragged down by the collapse of another currency, Luna, to which it was algorithmically linked.

The death spiral of the two coins tanked the broader digital asset market. 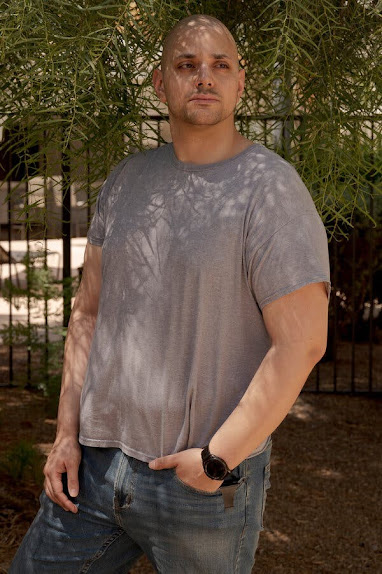 Martin Robert has two Bitcoins stuck on Celsius Networks and is afraid he will never see them again. He had planned to cash the coins in to pay down debt.Credit...Bridget Bennett for The New York Times

The fortunes of many small investors also began tanking.

On the day that Celsius froze withdrawals, Martin Robert, a day trader in Henderson, Nev., was preparing to celebrate his 31st birthday.

He had promised his wife that he would take some time off from watching the markets.

Then he saw the news.

Mr. Robert has two Bitcoins stuck on the Celsius network and is afraid he’ll never see them again.

Before their price plunged, he intended to cash the Bitcoins out to pay down around $30,000 in credit card debt.

He still believes that digital assets are the future, but he said some regulation was necessary to protect investors.

Beth Wheatcraft, a 35-year-old mother of three in Saginaw, Mich., who uses astrology to guide her investing decisions, said trading in crypto required a “stomach of steel.”

Her digital assets are mostly in Bitcoin, Ether and Litecoin — as well as some Dogecoins that she can’t recover because they are stored on a computer with a corrupted hard drive. 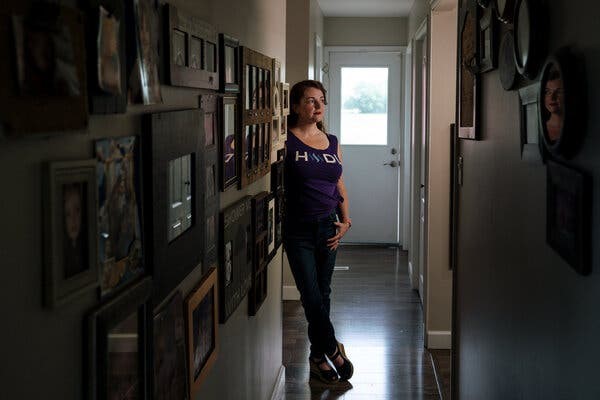 Beth Wheatcraft, a mother of three, said trading in crypto required a “stomach of steel.” Credit...Sarah Rice for The New York Times

The Bitcoin Trust, a fund popular with small investors, is also experiencing turmoil.

Grayscale, the cryptocurrency investment firm behind the fund, pitched it as a way to invest in crypto without the risks because it alleviated the need for investors to buy Bitcoin themselves.

But the fund’s structure doesn’t allow for new shares to be created or eliminated quickly enough to keep up with changes in investor demand.

This became a problem when the price of Bitcoin began to sink rapidly.

Investors struggling to get out drove the fund’s share price well below the price of Bitcoin.

In October, Grayscale asked regulators for permission to transform the fund into an exchange-traded fund, which would make trading easier and thus align its shares more closely with the price of Bitcoin.

When the crypto market was rollicking, Wall Street banks sought ways to participate, but regulators wouldn’t allow it.

So if banks wanted to put those coins on their balance sheets, they would have to hold at least the equivalent value in cash to offset the risk.

U.S. bank regulators have also warned banks to stay away from activities that would land cryptocurrencies on their balance sheets.

That meant no loans collateralized by Bitcoin or other digital tokens; no market making services where banks took on the risk of ensuring that a particular market remained liquid enough for trading; and no prime brokerage services, where banks help the trading of hedge funds and other large investors, which also involves taking on risk for every trade.

Banks thus ended up offering clients limited products related to crypto, allowing them an entree into this emerging world without running afoul of regulators.

Goldman Sachs put Bitcoin prices on its client portals so clients could see the prices move even though they couldn’t use the bank’s services to trade them.

Both Goldman and Morgan Stanley began offering some of their wealthiest individual clients the chance to buy shares of funds linked to digital assets rather than giving them ways to buy tokens directly. 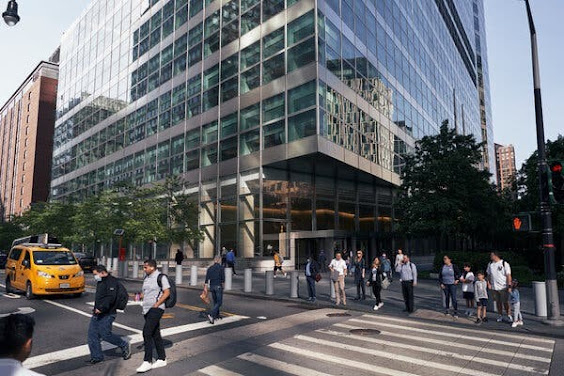 The headquarters of Goldman Sachs. Only a small subset of the company’s clients qualified to buy investments linked to crypto through the bank.Credit...An Rong Xu for The New York Times

Only a small subset of Goldman’s clients qualified to buy investments linked to crypto through the bank, said Mary Athridge, a Goldman Sachs spokeswoman.

Clients had to go through a “live training” session and attest to having received warnings from Goldman about the riskiness of the assets.

Only then were they allowed to put money into “third party funds” that the bank had examined first.

Morgan Stanley clients couldn’t put more than 2.5 percent of their total net worth into such investments, and investors could invest in only two crypto funds — including the Galaxy Bitcoin Fund — run by outside managers with traditional banking backgrounds.

Still, those managers may not have escaped the crypto crash.

Mike Novogratz, the chief executive of Galaxy Digital and a former Goldman banker and investor, told New York magazine last month that he had taken on too much risk.

Galaxy Digital Asset Management’s total assets under management, which peaked at nearly $3.5 billion in November, fell to around $1.4 billion by the end of May, according to a recent disclosure by the firm.

Had Galaxy not sold a major chunk of Luna three months before it collapsed, Mr. Novogratz would have been in worse shape.

But while Mr. Novogratz, a billionaire, and the wealthy bank clients can easily survive their losses or were saved by strict regulations, retail investors had no such safeguards.

Jacob Willette, a 40-year-old man in Mesa, Ariz. who works as a DoorDash delivery driver, stored his entire life savings in an account with Celsius that promised high returns.

He planned to use the money to buy a house.

When crypto prices started to slide, Mr. Willette looked for reassurance from Celsius executives that his money was safe.

But all he found online were evasive answers from company executives as the platform struggled, eventually freezing more than $8 billion in deposits.

Celsius representatives did not respond to requests for comment.

“I just don’t see how what they did is not illegal.”

Emily Flitter covers banking and Wall Street. She is the author of “The White Wall: How Big Finance Bankrupts Black America.”