How Pessimistic Americans Could Worry the Economy Into Recession 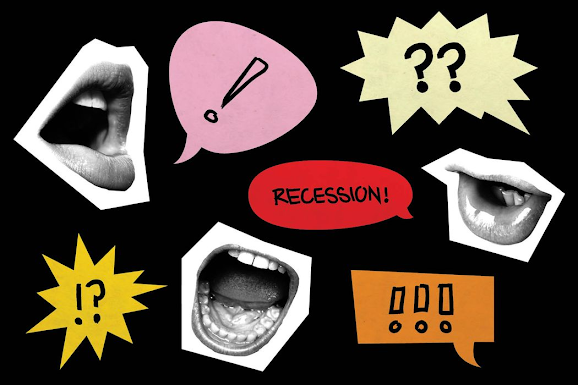 'There’s a concern that if people feel dour about things for too long, then it could actually start to manifest itself in economic activity,' says one economist. / Illustration by Barron's Staff; Dreamstime (4)

Alexander Avgerinos is preparing for a recession.

Over the past month, the 27-year-old restaurant cook in western North Carolina has begun to cut his expenses, opting to buy groceries instead of dining out, to cancel all but one of his streaming services, and to use his air conditioning only at night.

His own financial situation hasn’t changed, but given the higher prices he feels at the gas pump and the global uncertainty he reads about in the newspaper, he decided it was time to, as he put it, “bunker down.”

Avgerinos is among a growing number of Americans who have begun to rein in spending and alter their behavior amid widespread fears of a recession, even as the unemployment rate stands near a record low and consumers overall remain remarkably resilient.

Delinquency rates are at historic lows, savings are roughly $2 trillion higher than before the pandemic, and private investment in areas like buildings and software continues to rise.

Yet with consumer sentiment at its lowest level on record, the rising concern among economists is that the overwhelmingly pessimistic national mood is having a tangible impact on economic activity—thereby boosting the chances of bringing about a downturn.

Americans can, in effect, talk themselves into a recession.

“If you live in this world where you hear over and over again how terrible it is, especially as energy prices are rising, it starts to become a bit of a self-reinforcing notion,” says Ryan Severino, chief economist at real-estate services firm JLL .

“There’s a concern that if people feel dour about things for too long, then it could actually start to manifest itself in economic activity.” 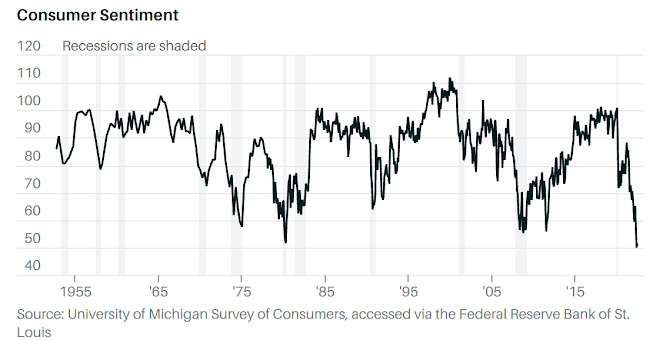 To be sure, the negative national sentiment isn’t unfounded, and it’s far from the only headwind facing the U.S. economy.

The highest inflation in four decades is weighing on consumers’ purchasing power and outpacing wage gains, while the falling stock market is eroding investors’ wealth and a series of interest-rate increases from the Federal Reserve is making home- and car-buying more expensive.

New data that will be released on Thursday could also show negative economic growth for the second straight quarter, a trend often associated with downturns but that doesn’t mean on its own that the economy is in an official recession.

The National Bureau of Economic Research, the formal arbiter of U.S. recessions, often doesn’t declare one for months or quarters after it has begun.

Even still, consumer sentiment is worse than the economic fundamentals would suggest, economists say.

In June, sentiment hit the lowest level on record since the University of Michigan began its survey in the late 1970s—meaning the country collectively feels worse now, according to the data, than it did through record-high inflation in the 1980s; when the dot-com bubble burst in the early 2000s; in the aftermath of the Sept. 11, 2001, terrorist attacks; during the depths of the financial crisis and recession from 2007-09; and when the country shut down due to Covid in 2020, sending the unemployment rate soaring to nearly 15%.

And it’s unprecedented for sentiment to be so poor while the job market remains so tight, with nearly two jobs available for every unemployed worker.

That divide between attitudes and a still-fairly-rosy economic reality is heightening the fear among economists that Americans are acting more cautiously than they need to out of intense concern for a potential downturn, in turn boosting the chances that recession talk could become self-fulfilling.

As recession fears have mounted, the Biden administration for months has sought to combat concerns by highlighting the positive aspects of the economy, particularly the job market.

President Joe Biden on Monday told reporters he does not believe the country is entering a recession in part because the unemployment rate remains so low and Americans are still investing.

“We’re not seeing that now.”

One explanation for the historically low sentiment is that it’s a reflection of not only an inflationary economy but also a broader uncertain world, where the coronavirus pandemic continues to prevent a full return to normal, a war rages in Europe, and political polarization divides the U.S., among other dynamics.

“People are emotionally distraught,” says Robert Shiller, a Nobel laureate and Yale University economist who wrote a book in 2019 on how popular narratives influence consumer behavior.

“These things, they really have a negative effect on consumer spending.”

The evidence that the pessimistic outlook is having an impact is starting to pile up.

Some 42% of Americans describe themselves as “not impacted financially, but cautious with spending,” according to a NielsenIQ survey from the middle of July—a nine percentage-point climb since December.

Nearly two-thirds of Americans say they are keeping more money than they should out of the market because of worries about loss, the Allianz Life Insurance Company of North America found in its second-quarter market perceptions study.

Retail sales, though still fairly strong, are failing to keep up with inflation.

Consumers by and large are “not spending with any gusto or any enthusiasm, which you might expect if you looked at their financial situation.”

Given the precariousness of the current economy, any further shift toward more conservative behavior from consumers or businesses could have damaging ripple effects.

With optimism among small-business owners at an all-time low, the share of firms looking to hire and invest is falling, the National Federation of Independent Business found in a June survey.

Nineteen percent of firms plan to create new jobs in the next three months, a seven percentage-point drop from the month before.

And while 51% of owners reported investing in things like new equipment or facilities in the past six months, only 23% are planning the same in the next few months—a share that fell two percentage points from May.

“It’s not as if there aren’t any weaknesses,” says Gregory Daco, chief economist at EY-Parthenon with Ernst & Young.

The warning signs for how consumers and businesses are feeling stretch beyond the historically low sentiment survey alone.

Wells Fargo has been tracking what it calls the Animal Spirits Index—a reference to the phrase John Maynard Keynes coined to describe the emotions that shape consumer behavior—composed of five different indicators designed to represent different behaviors across the economy.

That index, which includes components ranging from the Conference Board’s consumer confidence survey to the S&P 500 and the yield spread, has now been negative for six straight months—a trend that has never before failed to predict a recession, says Azhar Iqbal, an econometrician with Wells Fargo.

“What we are really looking at is sustained pessimism,” Iqbal told Barron’s.

“And that’s one major reason we are forecasting a recession.”

Still, though warning signs are mounting, it’s not a slam dunk that an overwhelmingly bad mood among consumers can affect behavior enough to bring about recession, nor is it a foregone conclusion yet that the U.S. economy itself is headed for a downturn within the next year.

Despite low sentiment, a recession could still be avoided so long as consumers are still able to spend money even if it requires dipping into savings, says Claudia Sahm, a former Federal Reserve and White House economist and the founder of Stay-at-Home Macro Consulting.

“The determinant of spending is income,” Sahm says.

“As long as people can keep spending, at least on necessities…they’re going to spend until they can’t.

And right now, most people still can.”