Erdoğan is an infuriating but indispensable ally 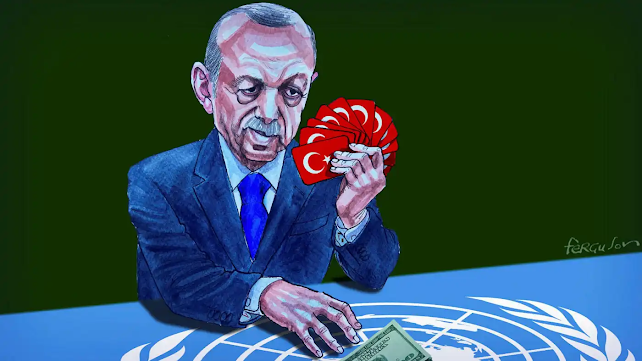 Why not chuck Turkey out of Nato?

It sounds like a great idea — particularly after a few post-summit drinks.

There is no doubt that Recep Tayyip Erdoğan is an infuriating ally.

After dropping his objections last week to Finland and Sweden joining Nato, the Turkish president immediately created fresh doubts — suggesting that Turkey’s parliament will not ratify the agreement, unless Sweden extradites 73 people Turkey accuses of terrorism.

Surrendering anyone to the mercies of Erdoğan’s justice system is a tough ask for any democracy.

Selahattin Demirtas, a Kurd and leading opposition politician, has been in prison since 2016 — despite a ruling of the European Court of Human Rights that he should be released and that his imprisonment had “merely been cover for an ulterior political purpose”.

His case is not an isolated example.

Osman Kavala, a businessman and philanthropist, was jailed for life without parole in April for allegedly plotting a coup.

The weakness of the evidence against him led to protests by western governments, human rights groups and the European Court of Human Rights.

Seven co-defendants of Kavala, including Hakan Altinay, a prominent academic, were jailed for 18 years on extremely questionable evidence.

The alliance says it is based on the defence of democracy and human rights.

But imprisoning political opponents on trumped-up charges is the kind of thing that Vladimir Putin does.

Indeed the Russian and Turkish leaders have long had a close relationship.

The admission of Finland and Sweden to Nato would be a big blow to Putin.

It would mean that Nato included every nation bordering the Baltic Sea, except Russia.

Erdoğan’s willingness to blackmail Nato over Finland and Sweden also creates doubt about how Turkey might behave in future crises.

Article Five — the mutual defence guarantee at the heart of the alliance that would be triggered by a Russian attack — depends on a unanimous vote.

So wouldn’t Nato be better off without Turkey?

The expulsion of Turkey, even if it were legally possible, would be a strategic disaster.

The Black Sea is the key route to the Mediterranean and the wider world for both Ukraine and Russia.

If Ukrainian grain is ever to make it out of the country’s ports to world markets, it will go through the Black Sea — and Turkey controls the entrance to the sea.

That critical role has been underlined by Turkey’s detention of a Russian ship allegedly carrying stolen grain from Ukraine.

If Turkey were expelled from Nato and became a de facto ally of Russia, Ukraine would effectively become a landlocked country and Russia would be at the gates of the Mediterranean.

The security balance in the Middle East would also be seriously complicated.

The Turks have a large military presence inside Syria.

Although they have clashed with the Americans over the role of the Kurds, they oppose the alliance between Russia and the Assad regime.

The Turks have also provided refuge for 3.7mn Syrian refugees — a humanitarian act that has taken much of the pressure off the EU.

There is no doubt that Erdoğan has seriously tarnished Turkey’s democratic credentials.

But, unlike Russia, Turkey poses no security threat to the rest of Nato — except perhaps for Greece, which is alarmed by Erdoğan’s muscle-flexing in the Aegean Sea.

Given the overwhelming importance for Nato of countering Russia, it is more vital than ever to keep Turkey on side.

Erdoğan knows this. He is using the leverage the war in Ukraine has given him.

The situation is maddening, but it is not unmanageable.

The Turkish leader is perfectly capable of shifting position, when it suits him.

And the other Nato members also have leverage they can use on Turkey.

Erdoğan’s flexibility is demonstrated by his shifting attitudes to Saudi Arabia.

The Turks and Saudis have been at loggerheads for many years — divided by their clashing aspirations for regional leadership and their opposing attitudes to the Muslim Brotherhood.

At one stage, the Saudis boycotted Turkish goods.

With the Turkish economy in a parlous state, Erdoğan can no longer afford that kind of antagonism.

So he has patched up relations with the Saudis — recently welcoming Crown Prince Mohammed bin Salman, the country’s de facto leader, in Ankara.

The weakness of the Turkish economy gives the other Nato members some counter-leverage over Erdoğan.

Inflation in Turkey is now almost 80 per cent — in large part because of Erdoğan’s own economic mismanagement.

The Turkish currency has fallen by more than 60 per cent over the past two years.

The country suffers from a huge current account deficit and there has been persistent talk that it will eventually need an IMF bailout.

That would be a humiliation for Erdoğan — with a presidential election looming in 2023.

That is where its Nato allies could help. In return for economic assistance, Turkey might have to take a more reasonable attitude on Nato membership for Finland and Sweden.

And if that sounds like haggling in the Grand Bazaar of Istanbul — so be it.