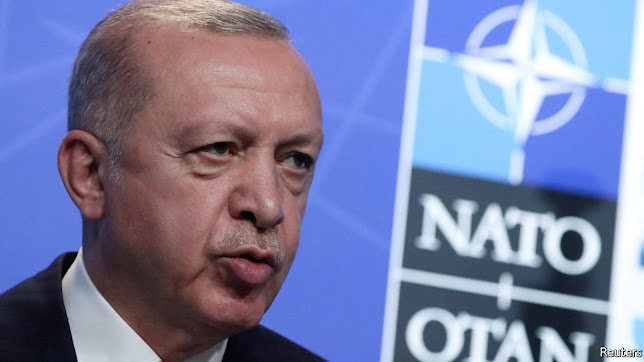 The phones at the “Kulliye”, the vast 1,100-room Turkish presidential complex, have been ringing incessantly as Western leaders and officials call to find the answer to an urgent question: what is President Recep Tayyip Erdogan’s price for allowing Sweden and Finland to join nato?

Most nato leaders have welcomed the two applicants with open arms.

In contrast with many recent members—the most recent being Montenegro and North Macedonia—the Nordic applicants would bring advanced military capabilities to the alliance and help to strengthen its northern flank.

And by abandoning their tradition of non-alignment, their decision to join nato is a stinging rebuke to Russia and its war of aggression against Ukraine.

But Mr Erdogan astonished his allies earlier this month when he said he opposed the application.

It is still not clear precisely what he wants: restrictions on his foes abroad, American weapons, political attention or the favour of Vladimir Putin, Russia’s leader, whom he still calls a friend?

He has accused the duo, especially Sweden, of being “a complete hotbed of terrorism” for harbouring members of the Kurdistan Workers’ Party (pkk), insurgents in the predominantly Kurdish regions of Turkey, and the followers of Fethullah Gulen, whom he accuses of fomenting the failed coup of 2016.

Such accusations could be levelled against many members of nato—not least America, which has armed the pkk’s Syrian offshoot to fight against the jihadists of Islamic State, and is home to Mr Gulen himself.

The difference is that when new countries apply, nato’s rules require all existing members to support the applicant, giving any one of them leverage.

Greece, for instance, held up North Macedonia’s membership for a decade because of a dispute over the name of the new ally.

Now Mr Erdogan seeks to exploit the most acute crisis in European security since the end of the cold war to gain political advantage.

On May 21st he spoke to Jens Stoltenberg, the nato secretary general, as well as Sauli Niinisto, the Finnish president, and Magdalena Andersson, the Swedish prime minister.

There was no sign of a breakthrough. Mr Erdogan’s office tweeted that Turkey could not respond positively before the Nordics showed solidarity with Turkey “concerning fundamental issues, combatting terrorism in particular.”

It told Finland, vaguely, that it expected “respect” and “support” for its security concerns.

It demanded, more sharply, that Sweden “take concrete steps” against the pkk and its offshoots, and lift an arms embargo it has placed on Turkey.

According to a list circulated by Turkey’s pro-government media, Mr Erdogan’s demands include clamping down on exiled Gulenists; cutting off support to the administration of north-east Syria, which Turkey considers to be an extension of the pkk; and extraditing more than 30 sympathisers of the two groups.

Mr Erdogan may be overplaying his hand, however.

Neither Sweden nor Finland is likely to extradite exiles to a country that has detained more than 300,000 people—from armed militants to students and politicians—on terrorism charges since 2016.

“A diplomatic compromise is possible but far from certain,” says Paul Levin, director of Stockholm University’s Institute for Turkish Studies.

The fight against the pkk involves fundamental questions of national identity for Turkey, says Mr Levin, but many Swedes see support for free speech and solidarity with the downtrodden as a fundamental part of their identity, too.

This will make it more difficult for either side to compromise.

Turkey’s objections may have less to do with Sweden and Finland than with America.

Mr Erdogan has felt snubbed by President Joe Biden, who has kept his distance, in contrast with Donald Trump, who embraced him.

Mr Erdogan was not among the 100-odd world leaders invited to take part in Mr Biden’s video “summit for democracy” last year.

Turkey was also outraged that America imposed sanctions and booted it out of the programme to build the f-35 stealth fighter in response to Turkey’s decision to buy and deploy the Russian-made s-400 air-defence missile system.

Relations have appeared to improve of late, and a deal for Turkey to buy 40 new f-16 jets along with kits to upgrade another 80 fighters seemed to be gaining support in Washington.

Perhaps, some think, Mr Erdogan is trying to use his leverage in nato to expedite the f-16 deal.

More likely is that his obstructionism will raise the ire of Congress.

Turkey would also like other nato members to resume arms sales that were partially halted after it launched a military offensive against the Kurds in Syria.

The last and least charitable explanation is that Mr Erdogan is doing Mr Putin a favour, or that he is hoping for one.

The relationship between the two strongmen remains inscrutable and Turkey’s policy in the Ukraine war has been an exercise in fence-sitting.

But it refuses to align with Western sanctions against Russia and courts Russian money instead.

Sweden and Finland had hoped to conclude the negotiations with nato quickly, and sign the accession protocol before the alliance’s summit in Madrid on June 29th-30th (ratification and formal membership would take several months).

But that prospect is fading.

“This is like a Swiss-army knife for Erdogan—a multi-functional tool to get concessions from the Swedes, or whip up nationalist sentiment, or get face-time with Joe Biden,” says Eric Edelman, a former Pentagon official and ex-ambassador to both Turkey and Finland.

“I am sure he is going to drag this out at least until the Madrid summit, if for no other reason than that it will make him the centre of attention.”

That makes for an even more anxious wait by the applicants.

Their commitment to join the alliance has angered Russia, which has threatened undefined “military-technical” measures.

Until their accession is completed, they are not protected by Article 5 of the nato treaty, which states that an attack on one ally will be treated as an attack on all.

Mr Erdogan’s holdup adds to the importance of the interim security assurance offered by America and some other allies such as Britain.

“We’re going to work together to remain vigilant against the threats to our shared security and to deter and confront any aggression while Finland and Sweden are in this accession process,” Mr Biden declared on May 19th after hosting Mr Niinisto and Ms Andersson at the White House.

“‘There’s nothing going to be missed,’ as my mother would say, ‘between the cup and lip.’”

Mr Biden, though, has said he will not travel to Turkey to broker a deal.

His senior officials have spoken to Mr Erdogan’s lieutenants, but the administration is at pains to stay on the sidelines.

“This is not a US issue, other than […] that we want to see it resolved in a way that brings these two members in the alliance.

And we’re confident that is going to happen.”

As in negotiations with hostage-takers, America may be feigning indifference in the hope of lowering Mr Erdogan’s price.

But Mr Edelman, for one, thinks Mr Biden will have to ring the Kulliye: “The president is the leader of the alliance, and he has repeatedly said that ‘America is back.’

He’s going to have to step up and act as the leader of the alliance."