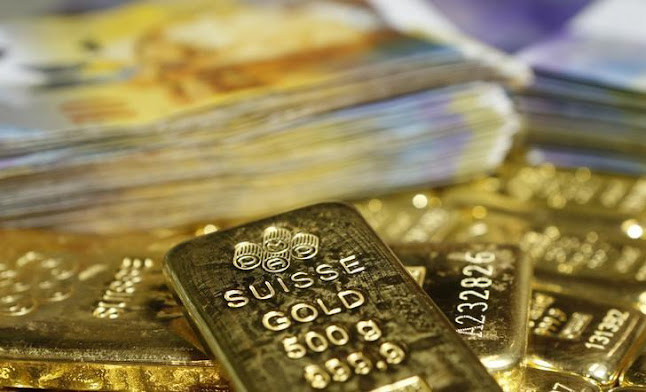 In the attached report, Matterhorn Asset Management advisor and Incrementum AG founder, Ronni Stoeferle, offers a compelling perspective on the rapid changes in the global monetary system and the massive implications behind Western sanctions unleashed on February 27th against Russia.

As Ronni indicates, these measures have staggering and far-reaching consequences for global markets, currencies and the gold price.

Recent sanctions and the “militarization of money” designed to target Russia are in fact hurting the West in equal, if not greater, measure, especially with regard to the weakening prominence of the USD and euro.

As Putin moves to trade more in RUB, other nations, including China and India, will tilt ever more toward de-dollarization in future agreements as global trade becomes increasingly multi-polar and multi-currency.

Sanctions confirm that the USD is no longer a neutral currency, but rather a highly politicized weapon.

Escalation or de-escalation in Ukraine, the world is now recognizing the growing likelihood of de-anchoring from the USD as a world reserve currency.

This, of course, will not happen over-night, nor will the Yuan simply emerge as the preferred currency.

Nevertheless, trust in fiat currencies as a whole is falling and thus forcing the inevitable issue of a needed (as well as neutral and real) asset like gold to partially cover future currencies as the global monetary order drifts toward a new era.

As the world monetary system re-organizes, those nations with the most gold will have the most currency credibility, and even a loose gold anchoring behind those currencies is a likely (as well needed) component of this rapidly-shifting environment.

Based on M1 and M2 data, Ronni walks through the potential impact such partial gold-coverage can have on the actual (rather than COMEX-manipulated) price of gold.

We think the implications are more than worth a thorough read.

1) The World Monetary System Is Undergoing an Epochal Upheaval

February 27, 2022, will go down in economic history as a major caesura, an epochal turning point.

This was a coordinated action from within the US, Great Britain, Japan and other states that are classified as part of the Western world.

In addition, Russian banks were excluded from using the SWIFT system and thus cut off from the international payment network.

The media spoke of a “militarization of money” that would dry up Russian war funding.

However, shortly after the sanctioning of currency reserves, the first doubts arose as to whether this step might not seriously damage the West in the long term, more specifically the US dollar and the euro.

The US and the euro area signaled that the globally significant US dollar currency reserves could be unilaterally declared worthless in one breath – at least temporarily.

The same is true of the euro, which, while playing second fiddle to the US dollar as a global reserve currency by a wide margin, is Russia’s largest foreign currency holding, making up 32.3% of its foreign exchange reserves.

Trade with “unfriendly” states is also to be switched to rubles, but whether this will succeed remains to be seen.

In any case, de-dollarization efforts have received a new boost from Western sanctions, as has the desire expressed by Russia, China and India for a new, multi-polar, world and monetary order.

The freezing of currency reserves and assets of Russian oligarchs will set alarm bells ringing among many other wealthy people, especially from countries that have strained relations with the West.

After all, given the hyper-moral debates in the West about human rights and climate change, why shouldn’t the fortunes of politicians or entrepreneurs who, for example, produce products that fuel climate change, suffer a similar fate?

However, a core function of money, its intrinsic value, has been affected in recent months.

Record high inflation rates, at 40-year highs in some cases, continue to undermine confidence in fiat currencies, but this erosion of confidence is only just beginning.

The immense year-on-year increases in producer prices, now over 30% in the eurozone and more than 20% in the US, will continue to fuel consumer price inflation in the months ahead.

For the eurozone in particular, there is great uncertainty as to whether the spiral of sanctions against Russia will further tighten, or ease in the near future.

There are many indications that further tightening is more likely.

The “militarization of currency reserves” has deprived the world’s reserve currency, the US dollar, of its neutrality, a neutrality that is indispensable for a universal currency.

The euro and other Western countries who are potential competitors for the US dollar’s position have taken themselves out of the game immediately.

The Chinese yuan alone will not be able to take over the role of the US dollar in the foreseeable future, even though China is now the most important trading partner for two-thirds of all countries.

The lack of convertibility, a lack of trust, rudimentary legal security and a comparatively small bond market make it highly unlikely that the yuan will be able to replace the US dollar any time soon.

Therefore, 50 years after the closing of the gold window, the chances are that gold may play a role again in the inevitable reshaping of the world monetary order.

Gold is politically neutral, it does not belong to any state, political party or institution.

This neutrality could serve as a bridge of trust between the geopolitical power blocs that currently seem to be emerging.

This formation of a new world (currency) order will not happen overnight.

If gold were indeed to be increasingly used as a currency again, this would naturally have a strong influence on the gold price, denominated in the respective fiat currencies.

After all, in just over five decades since the closing of the gold window, the hypothetical gold cover of the US dollar declined from an already low 14% at that time to only 8% today.

The significant decline in the gold coverage ratio is shown in the last column:

Central banks have by no means sworn off gold.

Gold coverage has mostly fallen so sharply because the money supply expanded so much.

The vast majority of this increase is due to central banks from emerging markets and developing countries.

They more than doubled their gold reserves since the 2006 low.

Among the most important gold buyers in recent years are central banks of emerging and developing countries such as Turkey, Russia, China, India, Sri Lanka, and also Thailand last year.

Western countries, on the other hand, had at best maintained their gold reserves, but in some cases significantly reduced them.

Switzerland, in particular, reduced its gold reserves by 60 percent.

Great Britain dropped out of the top ten after a decline of almost 50 percent, as did Portugal and Spain.

Significantly, these three Western countries were replaced by Russia, China and India, three of the five BRICS countries.

The US author, Jim Rickards, once said that in the upcoming reorganization of the world monetary system, every gold bar held by the central bank is like a chip in a poker game.

Whoever holds more gold will have more say.

Although Western countries have not expanded their gold holdings, or have done so only slightly – with the notable exception of Poland and Hungary – they still hold the largest gold reserves in absolute terms and as a relative share of total currency reserves, by a wide margin.

In this context, it is interesting to consider how much gold would appreciate if it were to be increasingly used by central banks in monetary terms again, i.e. not merely as an asset, but if there were a redemption obligation or at least a cover obligation.

For this purpose, we calculate the so-called shadow price of gold.

By this we mean the gold price that would result if the central banks or the banking system were to implement full or higher-percentage partial coverage of the corresponding monetary aggregate.

The shadow gold price naturally varies greatly according to the assumed gold coverage ratio and the money supply to be backed by gold.

Should only the money supply directly controllable by the central bank, the monetary base or M0, be backed by gold?

Or should another money supply also include the population’s balances with commercial banks, i.e. M1?

This was the subject of intense debate during the gold standard era, and countries came up with a wide variety of solutions.

Since the definition of M1 in the US is now almost identical to that of M2, as savings have also been included in M1 since 2020, we use M2.

In other words, how excessively central banks and commercial banks have inflated the (paper) money supply over the past decades. 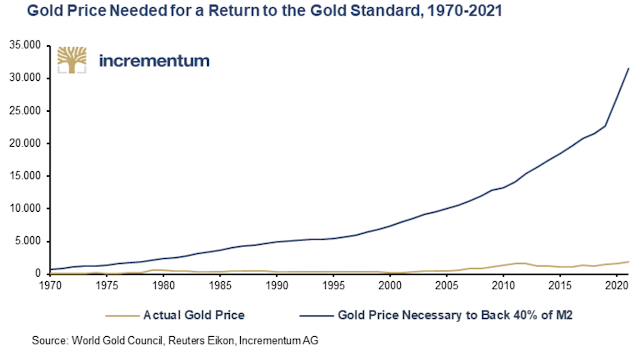 5) However the World Monetary System Will Change, Gold Will Be Among the Winners

We are facing major tectonic shifts.

The post-war order now seems to finally be on the verge of being replaced.

Much is still in the dark, but the era of completely unbacked money is rapidly coming to an end.

How the future global monetary system will be designed is still completely open.

Will centralized central bank digital currencies (CBDCs) set the tone, or will the money supply be (partially) privatized as private cryptocurrencies like Bitcoin are used as a means of payment in everyday life?

What is clear, however, is that never since the gold window closed have the odds been better for gold to play a monetary role again.